Alert But Without Acute Distress 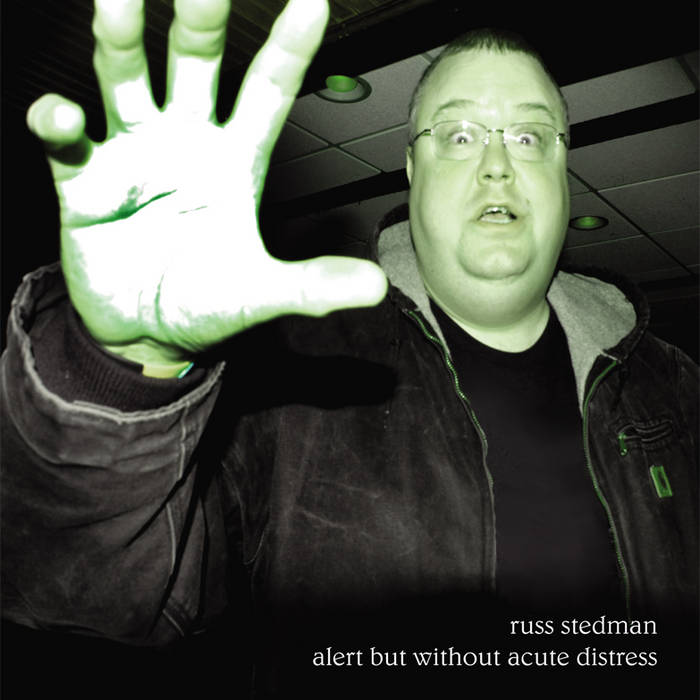 Every once in a while I have to take my "jazz ears" off & delve feet first into the kinda' RAWK my ears can CHEW & GNAW down upon... listeners who haven't heard Russ's extreme-talent guitar works before will be pleasantly surprised if they are as in to ENERGY as I am, & in terms of how far "out" he can go - this is STELLAR, I'll tell ya'! No matter what you thought you were gonna' hear, the next tune will take you in a totally different direction... twists & turns everywhere, by a guitar MONSTAH' that just can't quit makin' your mind move. There are always comparisons to FZ, but Russ can take an idea and forge it into something totally different that you might think it should be - a true master of zany, but solid, tune composition. I have a bit of personal experience with his playing, from our work together on "Midget Hill Mastery Tour", but "Acute" escalates his power platform to the edges of our galaxy & beyond. The opening track "Prowler", was killer, but it was actually "Beer & Setups" that caught my ear as favorite track, mostly 'coz of the smokin' guitar solos! Stedman has been "on the scene" for (literally) decades now, but he never rests on his laurels, just keeps on krankin' out some of the best guitar music on the globe. I give this a MOST HIGHLY RECOMMENDED, as well as the "PICK" of this issue for "best energy on a CD". "EQ" (energy quotient) rating is a phenomenal 4.99. (Rotcod Zzaj)

Opens with a funny & fun note-perfect cover of Iron Maiden’s “Prowler” (the opening joint from their 1981 album ‘Killers’), only missing maybe a touch of wah-wah on that main riff. Nitpicking. Track two, “Why am I Alive” continues the hot-rockin’ air guitar & cowbell inspiring frenzy this time with KISS lyrics from the song “Tomorrow and Tonight” (from their 1977 album ‘Love Gun’), among other lyrical appropriations. “Find them and Kill them” is a moody jazzbo instrumental with kind of heavy metal guitaristic soloing a la maybe Al DiMeola. “My Haunted Heart” continues in a ballady, minor key manor. “Random Word Generator” could be from Frank Zappa’s Synclavier period. ie, a grooveless frenzy of MIDI tones, suitably pointillistic and information-dense. Closer “Penis Dimension” IS a Zappa cover, so there ya go. Maiden to Zappa in one album by way of KISS. & can I just say, the production is so damn nice. Everything sounds clean as a freshly shaved beaver. (Ian Stewart)

One of the "energizer bunnies" of home taping, Russ Stedman continues recording and producing quality underground pop/rock. Alert But Without Acute Distress features some real gems...not the least of which are a cover of Iron Maiden's "Prowler," the incredibly effective original "Why Am I Alive?" (this thing rocks!), and an intriguing cover of Frank Zappa's "Penis Dimension" (from the 200 Motels film/album). Thirteen underground creations that range from catchy to goofy to rocky and back again... (Don W. Seven)

The first track (The Prowler) pricks your hopes that this is gonna be filled with the characteristic Stedman guitar aplomb. This is thick and heavy GUITAR rock with vocals. 2nd track (Why Am I Alive?) continues with double-tracked vocals and sounds like a nod to Kiss. That’s been one of the cool things about past Stedman albums; how Russ throws in stuff off the cuff (there’s one from Lindsey Buckingham later in the album). The next two tracks (Sophisticated Elephant & Find Them and Kill Them) are instrumental and veer in a different direction (another Stedman trait); away from the guitar hard rock metal to progressive rock ala Zappa and also into electronic territory with changes in guitar tone, tremelo and other things. Song five (My Haunted Heart) is maybe gothic, more vocals with a definite hook. Six (Black & White Rag) is a Rag with a light but intricate lead guitar — very cool. Seven (Beer & Setups) is a four to the floor lead metal jam with a lift from Buckingham’s “Trouble” for fun. Eight (Random Word Generator) changes direction again into complex midi synth riff computer jazz structures. The backwards guitar here is fantastic. Nine (Creature From the Wack Lagoon) is Russ rapping with rapid-fire culture references. It’s not nerdcore. Song 10 is a reworking of one of my favorites, “The Truth” by Scott Johnson (Love, Calvin) from his Mr. Joy cassette, with identical drum pattern but a prominent piano melody line. Loved it! Great guitar solo too (this was the album’s sole guest, Evan Peta with the guitar solo). Eleven (Please Don’t Shoot the Moon) jumps back to Zappa’s sophisticated progressive rock with a kind of Baroque feel. This one also reminds me of Dino DiMuro with its layered guitar harmonies. Twelve (Duke Miller’s Nightmare) is a short dramatic piece. This is wild! The guitars are mind-bending, warped — fantastic! The final track (Penis Dimension) couples piano with guitar in a classical and rock opera. A perfect ending. (Bryan Baker)

outré black metal, with a Victory Over the Sun interview and music from Liturgy and Jute Gyte.